I resume the work log after only partially accomplishing what I set out to do, which was to move to a different publishing platform. I'm pouring in all the content I've written in the past two years and a half into a private TiddlyWiki installation, where I am tagging and cross-linking everything I've written here. The idea is that I will produce more finished essays from this "raw material", like sifting through the dirt in order to find the precious stones.

We will see how that goes.

Meanwhile, having abandoned the daily therapy of writing, I've seen my spiritual RAM depleted, and I feel sometimes feel overwhelmed by the amount of vague ideas that I haven't materialized in the form or writing.

Yesterday I was set myself the task of creating a donation page for Method of Action. It was the most difficult thing in the world and I would procrastinate at every turn. On the surface it seems quite simple: hey, here's what I've done. I don't like advertising, and I think this kind of education should be free. I appreciate your donation. Bam, done.

But there is an existential struggle that wants to manifest in this donation page, perhaps the reader of this work log will know what I mean. When I wrote copy from my designer archetype it was simple and straightforward, yet inauthentic. If I wrote from my spiritual archetype it would come out dramatic and existential, yet honest.

So I sensed these two forces at conflict, each having its own merit and shortcomings, and the conflict was manifested in constant rewriting between the simple and straightforward with the baroque and sentimental, and plenty of procrastination because the emotional relationship to the page I was trying to create.

So yesterday, exhausted after only creating three lines of copy and no design, I decided to work it out through this dialectic with myself on this work log. If my original intention was that I would be able to produce more polished pieces of writing through self-editing my stream of thought, then it follows that I could produce a simple donation page by navigating through the complexities of it through writing.

The following text will probably be disorganized as I write through it. When I finish, I will take a nap, and then I will come back to distill it into a simple donation page, hopefully.

People often write to me to suggest some new feature in one of my games: "can I skip stages on the Bezier Game?"--no, you can't. It's a good feature, but working on old stuff prevents me from working on new stuff. No, I cannot implement this at this time. Perhaps in the future. I do this for pleasure, and I make no money out of it.

Others come with a sense of entitlement to support, having made no effort at figuring things out for themselves. Here is a particularly illustrative case: 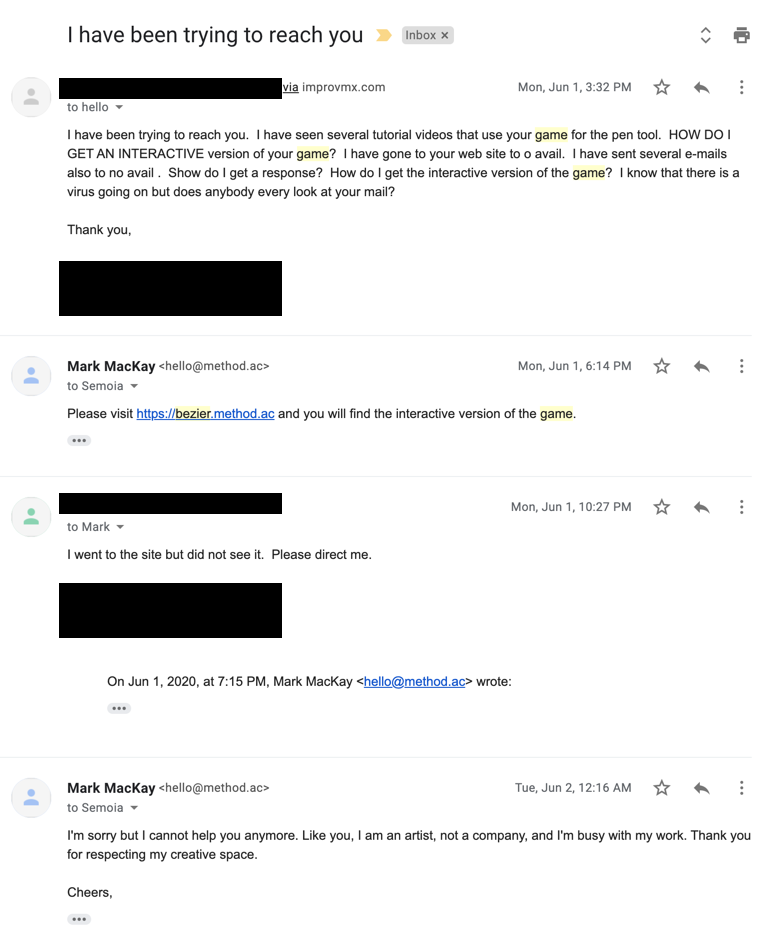 Sometimes I've felt that accepting donations is giving away the card that I use to say no to people, and I feel the need to clarify: giving me money entitles you to nothing. Time is my most precious resource. I live like a monk, without a TV or social media, my phone is perpetually in sleep mode. How could I sell this for the measly coins you throw into my tin can?

Yet I see the immaturity of this stance. I have a neighbor who is in a dire situation: he is a mentally handicapped thirty-something with the psychological composition of a 14 year old kid with behavioral problems. His mother died two years ago, and he was left to fend for himself living alone, taking up menial jobs to earn some money. Us neighbors help him out with food and other necessities.

My mother took him to a government institution to see if they could help him. A doctor took him into his office for diagnosis. 15 minutes later he came out with a big smile on his face "The doctor said I'm not stupid and I can work!", "Erm... that means you won't get any financial support". Too dull to put on a farce, yet too smart for government support, and so he is left empty handed.

The reason why I write about this neighbor is that someone tried to stabilize his situation by giving him a regular full-time job. He took up janitorial tasks at a non-governmental institution. Things seemed to be going well, but after some months he quit in a fit of rage: "I'm tired of being bossed around! This is unfair! They can't buy my liberty!", and instead of growing appreciative of the person who placed him at the job and coached him through it with saintly patience, he's now bitter towards him, and sees him as an exploiter of sorts.

It was tremendously instructive to see myself in him, because this is the emotional relationship I develop when I exchange my time for money, which I haste to state I do not actually believe, but I sometimes feel that way when I have to push myself through work I do not want to do. When seen through the case of my neighbor, I observe that what he perceives as a "loss of liberty" is actually an avoidance of responsibility.

What is the responsibility of accepting donations? That depends on the author. Under a patronage model, the donation is expected to be transformed into creative output. But I cannot sell this, because in me creation seems to have a will of its own, and I'm moving more and more in the direction of spontaneity. I do things because I cannot help myself from doing them.

I used to work on blank.page on a pay-per-hour basis, but it became so enjoyable I just couldn't help putting way more hours than René could afford. We didn't come into an agreement beforehand, he was like "well, let's try to resolve this through equity" and I was like "well, that's just a distraction at this time, let me continue working and we'll figure it out later", which we did, and it turned out great for both of us.

Let us attempt to answer the question directly: does a donation imply a responsibility of any sort? It seems the ball is on my side of the court, I must decide what responsibility I bear for the generosity of the user, and my first inclination is to answer as my neighbor would answer: I owe nothing, I already gave value without expectation, so the donation is given for the value already provided, not in expectation of a reward. Let us settle the matter of responsibility and obligation here.

It would seem that the only thing I could reliably provide is my honest gratitude, as--at this time--any donation, no matter how small, has a disproportionally large effect on my monthly income. I currently sustain myself with a ridiculously small monthly income, and I feel surprisingly comfortable with this budget, so despite it being "beer money" (that is, leisure money), it is appreciated beyond its nominal value.

Let us reframe the dialogue from obligation to gratitude.

I think I have worked through the major crux of the issue. I will now take a nap, and come back to write the copy of the donations page when I wake up.

Fund Mark MacKay
The creator of Method of Action

I created these games and tools over the span of eight years, self-financing the time and resources required to design, program, and maintain them. I find plastering products with advertising distasteful, and my only brush with advertising had very negative consequences. The other alternative, gating the games behind a paywall, would make them unaccessible to most students unless the teacher paid out of their own pocket because institutional frameworks don't account don't account for this kind of educational material.

It is in this spirit that I ask for donations, to finance more time to do the things that I love without the question of How am I going to make money out of this? influencing my decisions. It is said that when the product is free, then the user is the product, yet I refuse take this stance.

Instead, let us frame your donation as a gift of freedom, one of the highest virtues in my book, and for that I am deeply appreciative of your generosity. 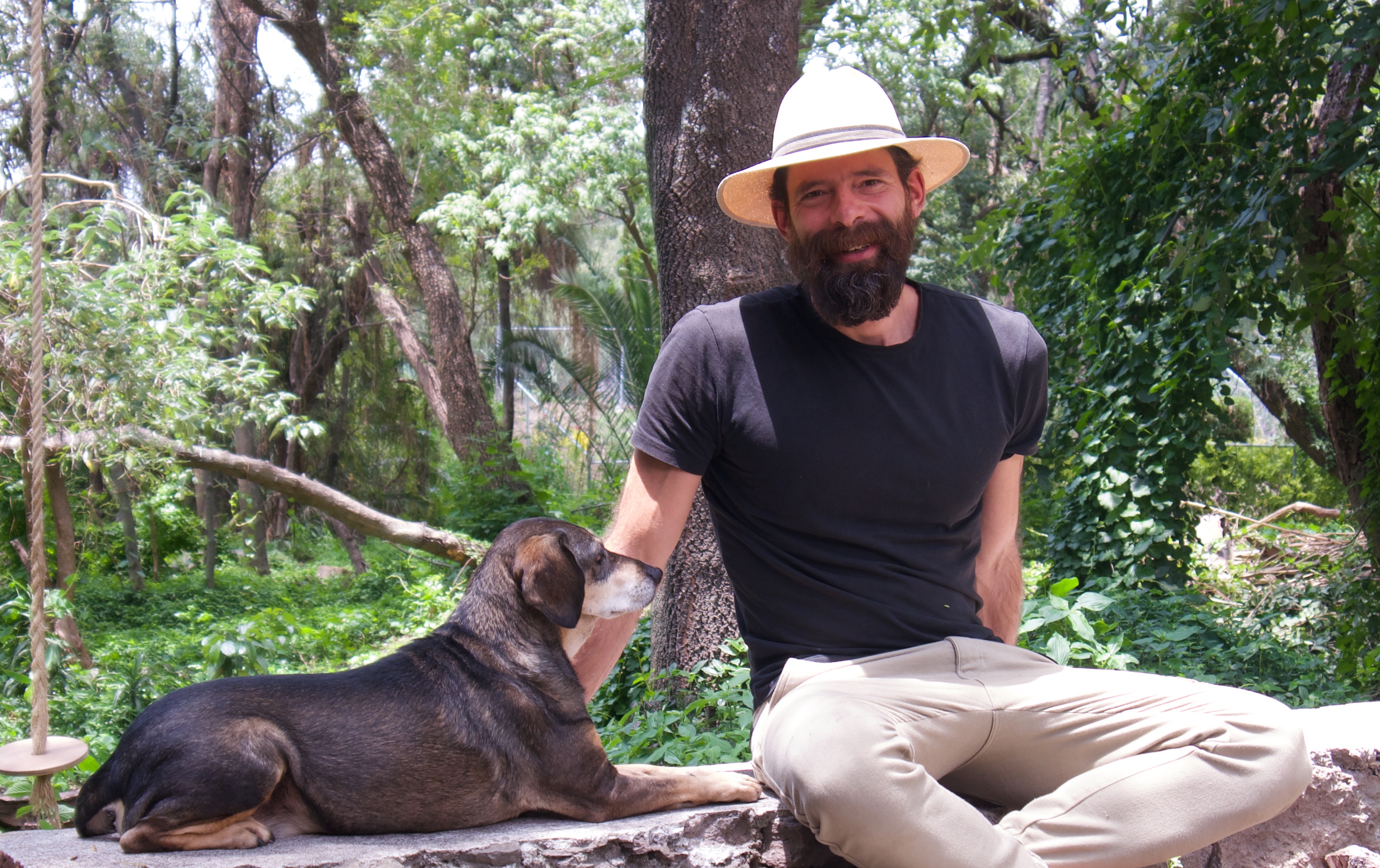 This is me, Mark, with Nina, named after the dog of Las Meninas of Diego Velázquez.