[Under translation] Interview with John Laing

Though the interview was originally in English, I translated it into Spanish and lost the original audio. Here I’m progressively translating the interview back into English. WIP. 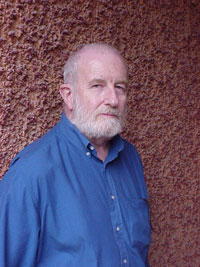 In my design student years I was fortunate enough to attend a class with one of the best teachers I’ve known: John Laing. He’s one of those few people who have as much as a calling as talent for teaching. The interview was done at the time when I was his student, so it’s been a long time.

John Laing is teacher at Ravensbourne School of Design and Communication in London. He is author of three books, including Do-It-Yourself Graphic Design and is co-author of the “Encyclopedia of Signs and Symbols”, though he modestly waves them away as not worth attention. In this interview, John speaks about his views on education, graphic and information design, culture and society. It took place at the Universidad de las Américas—Puebla where we had the privilege of enjoying John’s presence as a visiting professor for the course “History of information design” during the month of march 2002.

John, do you find any meaningful difference between Mexican and English students?

No. It’s funny that you ask, because Alejandro [Brizuela, Director of the design department] asked me the same thing. I answered that I found Irish students much more difficult than English or Mexican ones. I didn’t find it—other than the language—difficult at all! But there’s something in the Irish which is very difficult. It takes a long time to understand how they see the world and their place in the world. So the first time I went to teach to Ireland it was an utter disaster! I couldn’t “read” students there, until after some time. So the second time I went it was better, it took a second time for me to begin understanding. I haven’t found the same problem here.

I find students here ok, good people. Language gives a bit of a problem, but that’s my fault because I don’t speak Spanish. Well, everyone speaks English reasonably well.

Do you consider yourself a teacher or a designer?

I consider myself a teacher, yes. A lot. I mean, I was a graphic designer, but by serious accidents in life I found myself working in education. It takes a long time to learn how to do it. The first two or three years I thought about going back to graphic deisgn, but I kept moving. But then the spark ignites and you find something very valuable in education.

Throughout the years I’ve done design work as well as teaching, but nowadays I mostly do teaching.

I think there’s something very special in the teaching of design that doesn’t really apply to math, to chemistry, to engineering, and it will take me a while to explain it.

Allow me to explain what I mean. If you and I had lived in Ancient Greece say… five hundred years before Christ—the foundation of thought (not education!) in this society, the Greek society, would have been based on mathematics, philosophy lets say. So everything we remember from this society in Ancient Greece comes from the philosophers and the mathematicians. They built the foundation of everything that happened in Europe.

This of course stagnates, and for a long period mankind was not conditioned by philosophy or mathematics, but by religion.

It’s only during the Renaissance in Europe that between the 14th and 17th centuries that Greek knowledge, Greek teaching, Greek learning is rediscovered and European society looks forward. In England, between the 15th century and today, or let’s say last century, the prevalent culture was literature. For many people England is renown for its writers. For Germany, we could say it’s music, we have Bach, Mozart, Beethoven.

But I think that with the advent of the 20th Century there’s a change, and I think people have not understood, or understood well enough. Two things happened: an explosion of science, and in the middle of this thing the birth of mass communication. This brings me back to the design of graphic design. In the past, long past, I said that education was based on philosophy and mathematics. In the less long path it was based on literature and philosophy.

But I think that in the 20th century everything has turned around. Really, the language of our time is science and technology, and I don’t think we’ve understood this correctly. I remember having taught, twenty years ago. My design students, as their first assignment, I asked them to study the work of Albert Einstein. Sometimes I ask them whom is the greatest artist of the 20th century. They will say Picasso, or Matisse, or something similar. I think the greatest artist of the 20th century was Albert Einstein. If you define an artist as someone whom broadens human understanding (it is not that Picasso was not a good painter, he was a marvelous painter), but compared to Einstein, Picasso was a lesser figure because Einstein greatly broadened the understanding of the world we live in.

There could be another person whose name does not come up very often, even though we often use it, and that person is Edwin Hubble. We remember Edwin Hubble because of the Hubble telescope. It was Hubble who noticed for the first time that the Milky Way was only a galaxy among millions, or billions. This broadens our perspective of the world, almost to the point of exceeding our capacity for understanding. Now, it seems to me that there is not much a painter can do nowadays to even begin to compare with the tremendous grace that science has.

Well, it continues expanding human understanding. We could say that visual arts come from 50,000 years ago. There were painting on the walls of caves, and you see these paintings and you recognize the things that they were painting. You can draw a parallel between those things and the things you see today. And certainly, throughout mankind’s history, painting has always been there. The theory of relativity has less than one hundred years, and it has come to change the world. It’s not that I want to make any less of painting, I don’t, it’s still important. Literature is still important, music is still important. But what has changed our lives is physics, and in the second half of the 20th century I could say that what has changed our lives, and continues changing it is biology.

It begun in the 50s when Francis Crick and James Watson discovered ADN. This is incomparably more important than Picasso’s painting, the Guernica. A great painting, a great message, but the discovery of DNA is massively more important, and it will affect everyone who lives in the planet. It already affects many people on the planet.

So we are in the position of allowing people to communicate, specially in poor countries of the world; essential information about medicine and health. This is just one example, probably obvious. But I’ve never met a graphic designer whom I ask “What do you do” and doesn’t answer “I’m a graphic designer”. He or she never says “Well, my passion is improving the understanding of health and medicine”. They always tell me “well, I’m in love with typography” or “Is not the Apple Macintosh a wonderful computer?”, “have you used Photoshop 6”. As you see, there’s no attention to the true reason of being of design.

What is interesting about a car is not that it is a Ferrari or a Volkswagen. What is interesting is that it takes you from A to B efficiently, fast, and with multiple destination options. It’s not like the train in which you get to A so that it can take you to B. With the car you have that liberty. But of course, most people who think about cars don’t think that way, they think “Oh, I want a Ferrari, not a Volkswagen”. They are more interested in the car than what the car can do for them. And I think the same thing happens in graphic design, they are more interested in graphic design than what design can do—not for them—but for millions and millions of people.

So then I think graphic designers should begin thinking what is what they can do for people. They should think about what they could do for us instead of being fascinated by technology, let’s say. Or not only technology, but technique. I mean, typography is a beautiful thing. There are many things to read, of course, and a well designed book is always better than a badly designed book. But how many designers actually read the book? They just want to design it.

Before the advent of the computer, before the Apple Macintosh arrived, which I hurry to point out that it’s a miracle; Apple Macs are wonderful. But before that, say, ten or fifteen years ago, students didn’t have access to text and typographical composition. You had to draw parallel lines to indicate where they text was supposed to be. Students didn’t have to think about the text that would compose those lines, so they never thought about the message. They saw a magazine or a book and they saw the text areas as gray areas, without identity. When I teach typography, I always say that the most important thing about typography is language. Typography exists to make language work better, not the other way around. It’s very fashionable. At least some people find it fashionable. In America some people have absolutely no interest in legibility…

**Picking up the topic of graphic designers manipulating mass communication, is it not a bit destructive that we have the power to manipulate as in advertising?