Yesterday I left the house for the first time in a week. My mother and my sister were coming over for lunch and I had just run out of food. Even without their visit it was necessary, I was indifferent about finishing my experiment.

An experiment about what? I was not sure, but today I understood: Mexico has declared a state of emergency, and has exhorted all non-essential businesses to close down, emphatically asking people to stay home an entire month. They appealed to Mexican culture of cooperation in dire situations, which I must say is born out of the incompetence of the government. If you lose your job you seek refuge with your parents, if there’s a fire you put it out yourself, if a business insists on operating during a health crisis it’s the workers who must refuse to attend, as the government is unlikely to follow through in a timely manner. Mexican culture is not self-reliant or government-reliant, it’s society-reliant.

When I have an idea about an app or product that motivates me enough I first implement the essentials to see if my imagination matches reality. I will prototype a quick working thing, and if I decide it’s worth pursuing I will scrap my first working prototype and being anew, because building an app over a prototype is like building a house over the foundations of a hut. It doesn’t have to be bullet-proof or extensible or well-engineered, and this gives freedom for exploration. There are no rights or wrongs there’s only discovery.

This is what I feel this week was about: a prototype of a quarantine. What did I discover? Neither drinking water nor gas has been distributed to my neighborhood in the last two weeks, and we weren’t even in a state of emergency. People must have been foreseeing the situation and stockpiled on them.

I ran out of water ten days ago, and I’ve been without gas three days. Water, I boiled until I ran out of gas, sampling tap water in moderate amounts to see if it would made me sick. It didn’t. As for gas, cold showers are fine and I’ve been cooking with fire in a hole in the ground, which is more time consuming but surprisingly enjoyable and tasty. I made myself an improvised gym made out of tires, large rocks, and a rusty oil barrel that was in the land behind the house (debris carried by the contaminated river). It looks like a crossfit gym coming out from a Mad Max movie: 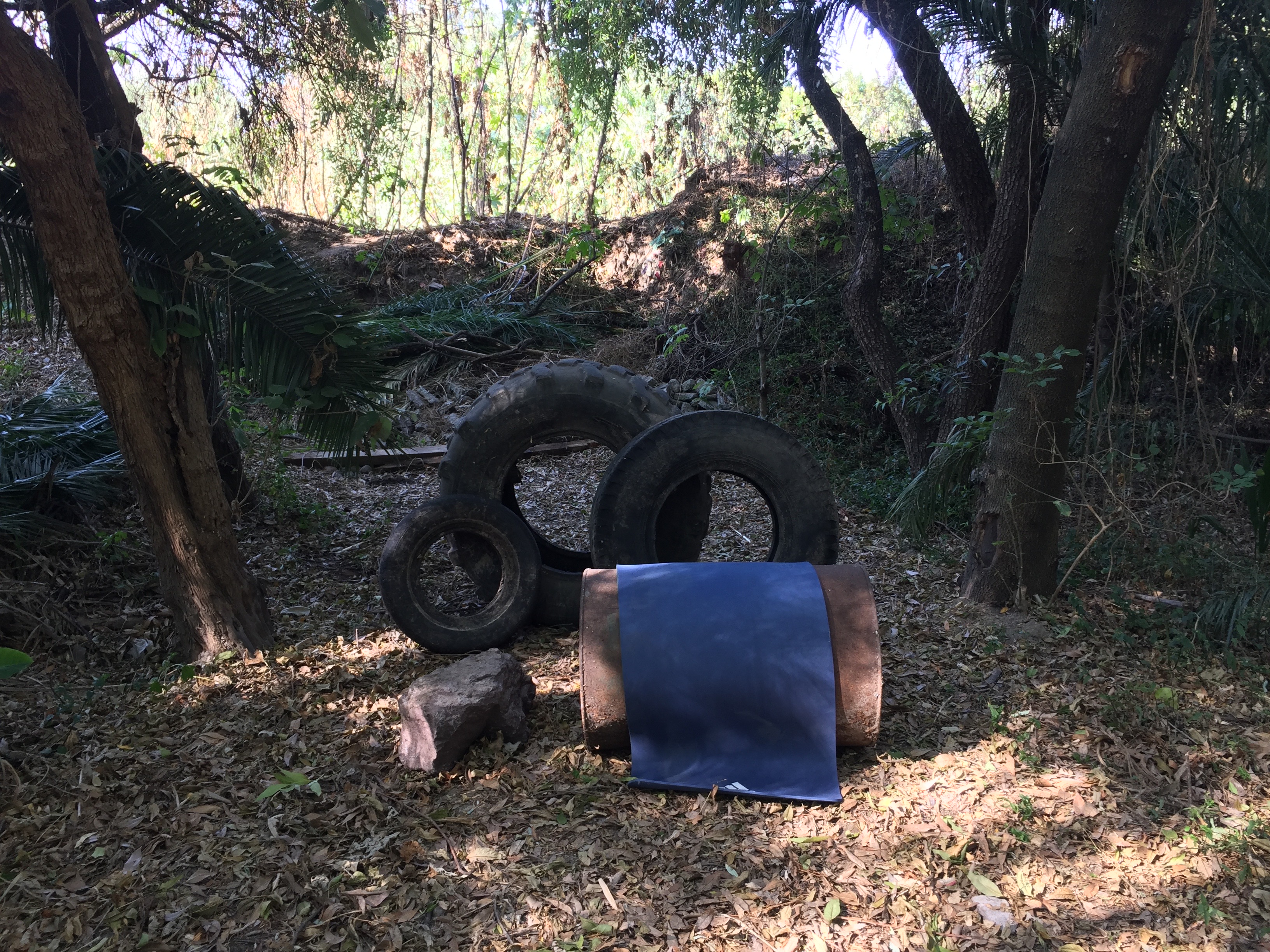 I also worked on the computer at home for extended periods and discovered this chair will destroy my back if I continue working like this. I threw my weed into the river because boredom would lead me to it too early in the day, and the daily haze is not a dignified state of living. I discovered that the garden is a great hobby and it is a tremendous privilege to have a piece of land in these circumstances. I’ve been enjoying toiling these sunny days clearing the jungle behind my house.

The quarantine prototype proved immensely valuable as a preparation for the real thing, and even more apocalyptic scenarios. Eating roasted chicken from the fire hole in the backyard, I told my family that if any of them got sick, they should come to this house to spend their convalescence. My mother and my nephew are in the vulnerable age bracket and this would be the most sane thing to do.

I was suddenly hit by a deja vu: I’ve been through this before, but how? And then I remembered a dream I had five years ago which I published on Medium under the title A desire to provide protection, unsure if I’m up to the task:

I was in my childhood home in Puebla, Mexico. The world was in great scarcity, a post-apocalyptic world. I was on the rooftop holding a rifle, along with a kid who was my protégé. The day was pleasant and we were enjoying the sun.

Two guys in ATVs came from the field next to my house, I was frightened. We went downstairs to see what they wanted. They demanded food, we had none. They then restrained me and took my friend. I was left devastated, knowing that they would eat him.

This is not a premonition of the future, of course. It’s the subconscious pointing out to the fact that you are not prepared for a situation like this. I may not be there just yet, but I’m much closer now than I was five years ago.