I write this on a sheet of paper becuase now I’m on my fourth day without electricity. More than ever, my life seems to take part in a monastery, it has been more than two weeks here, and I’m enjoying it tremendously. There are many lessons coming at once but without electricity it is impossible to register everything unless I use paper.

I cleared out a path in the land behind the house where I sometimes do walking meditations. It is beautiful, but there’s still some trash, and some glass, and some nasty things. Yesterday my nephew, who is 5 years old, came and I showed him the mechanics of the party: collect trash from the path and gain home printed currency. This currency is monopoly money, and will be good to buy trinkets at a “store”. Kinda like Chuck e’Cheese but the prizes are trinkets that I found in my house that may be of interest to kids but otherwise I would have thrown away.

All plants, even shade plants, strive for sunlight. They sometimes enter conflict because of it. Fast growing plants such as vines crawl and creep until they smother a tree, and the same scenario plays out all over the plant world. There is not one plant, not even the carnivorous ones, that would turn its face away from the sun. And becuase of their desire to look at their celestial father they enter conflict with each other. They cause considerable damage to each other, but this is nature and should not be compared to human experience, but as we possess no other experience I shall go on.

The role of the gardener is that of arbitration of conflict for these mad sun driven beings. A taro plant was struggling with another to get sunlight. Since it was abvious that the taro would win the math, the other plant was never going to die, it was to live a miserable life under the shade of a giant. These conflicts are to be resolved by human intervention.

In today’s strange cultural environment, I have seen that many people find it immoral to remove and kill plants. Immoral is the wrong word, it is aversion experienced as the immoral act of killing a living thing out of a capricious will. This is misdirected compassion, like the lover of dogs who hates people, there is too much identification with the [material part of life], rendering the gardener incapable of performing his or her task.

My mother sat down and had half a coffee with me. She said she would only have half, because an entire coffee makes her nervous. She stayed over for the night, she usually sleeps at my sister’s. Now she’s left for the electricity company, to try to get the lights running again. Electricity drives the water pump, so we’re without water too.

Writing like this is much more pleasant to the author, but it’s a hassle to the reader. Thought is all over the place, but it’s effortless to write down. This is giving the reader the task of digesting unprocessed thought. 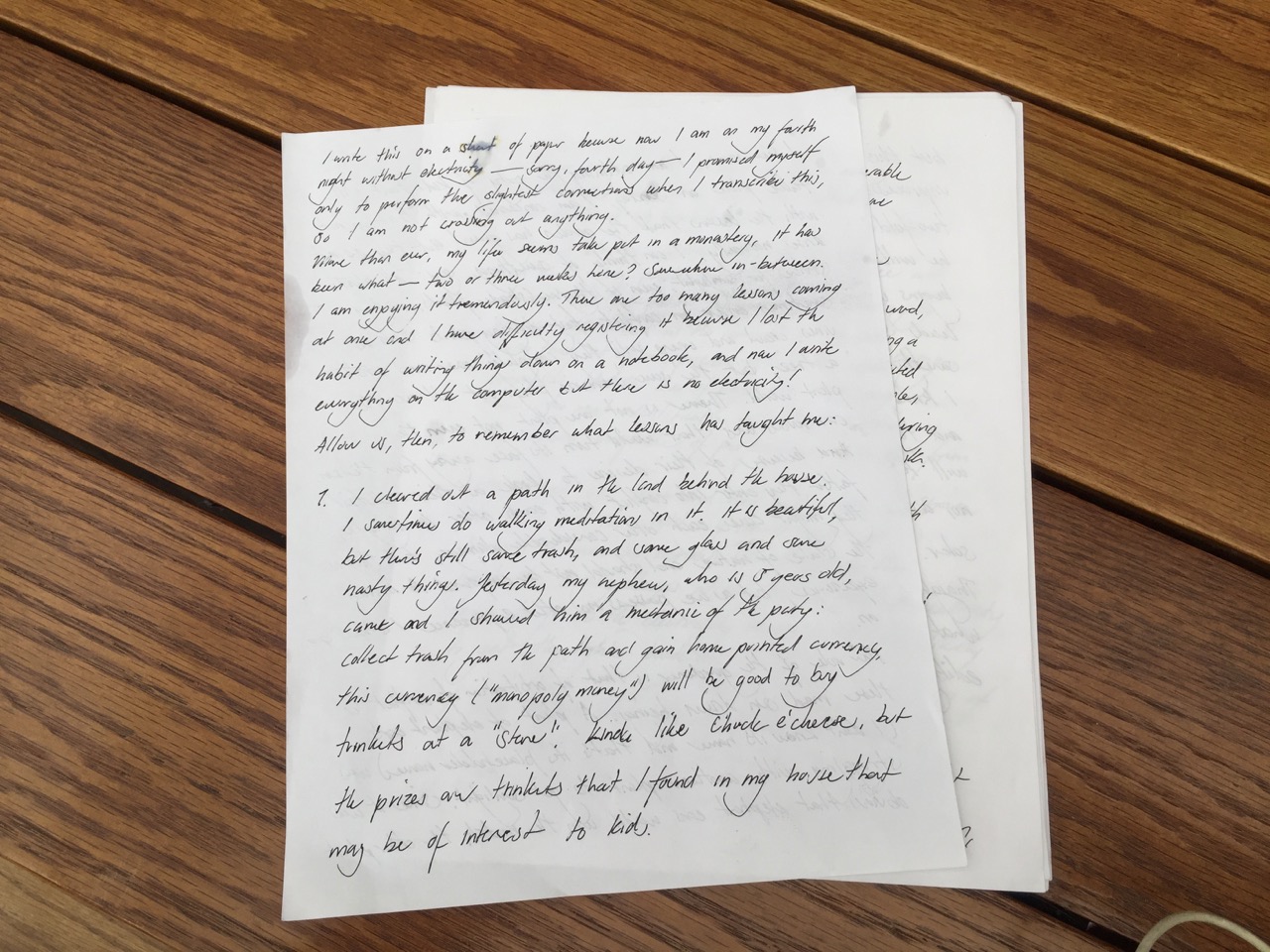