How to make a good mission great

Cleaning the house, I came across a booklet property my brother: How to Make a Good Mission Great. 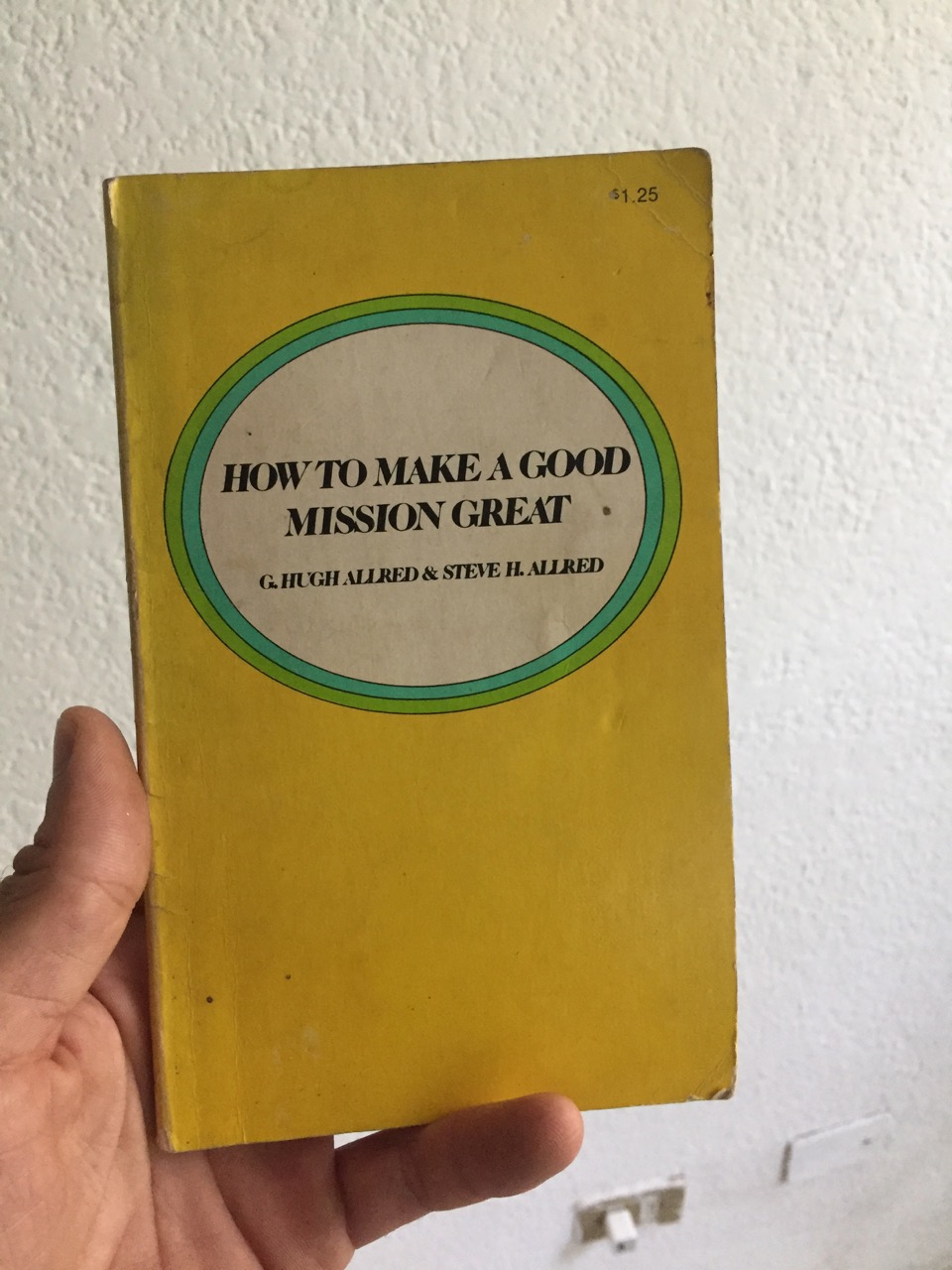 The booklet is a guide for Mormon missionaries, reminding them of the true purpose of the mission, offering advice in dealing with difficult people, and especially giving guidance in effective communication.

The guide is a treasure house of advice and psychological insight for anyone undertaking a spiritual endeavor, not just Mormon missionaries. I found the child order insights particularly interesting:

An asset of the eldest child is that it is often easy for him to be obedient to the rules and authority of the mission. He also tends to show genuine concern for others and to be responsible and dependable in his work. He may show a healthy evaluative attitude towards new ways of doing missionary work. He is often intelligent, articulate, a high achiever.

By contrast, an eldest child may use res and authority to dominate others, and his missionary efforts may suffer as he tries to boss, smother, or act superior to his companions and others. He may use anger or a powerful tone of voice to try to get his own way. Perhaps he is overly critical of others. He may also tend to be too responsible for and too protective of his companions and investigators, to move in and do for them those things they should be doing for themselves, thus robbing them of their self-reliance. When things go wrong, he may feel that it is his fault and that he will be blamed for the irresponsible actions of others. (Parent contribute to the development of these faulty attitudes and behaviors when they leave the eldest child in charge of younger brothers and sisters and then blame him for their misbehaviour). He may also be too rigid and cautious and therefore afraid to follow spontaneously the promptings of the Spirit.

The eldest child also tends to be intolerant and critical of himself and others, and to set such high expectations that he is easily discouraged. A firstborn tends to be achievement-oriented if he is the focus of his parents’ aspirations. He may equate his worth with his achievement to an extreme degree, so that when he experiences the slightest difficulty, he feels worthless and unloved. It is all or nothing for him. Such a discouraged individual may completely withdraw.

What we are suggesting is that the eldest child may deceive himself with the faulty ideas that he can be worthwhile and important only by bossing, dominating, and acting superior to others. The eldest child who is in tune with his Heavenly Father, however, tends to strive to achieve worthwhile and significant goals in the mission field through the wise and sensitive use of his special qualities of responsibility, dependability, respect.

A strength of the second child who is close to his Heavenly Father is that he may strive to feel worthwhile and important by doing things differently. He tends to search for new, different, more effective and more efficient ways of accomplishing the objectives of missionary work. For example, he may, with his leaders’ permission, develop better methods for introducing the gospel to others. He tends to be creative, active and to work for progress through effective change.

The second child may have, as a liability, a rebellious attitude, which is demonstrated by the attempts to undermine the rules and authority of the mission. (This faulty behavior stems from resentment at being dominated by an eldest child and then generalizing this resentment to anyone in authority). He may deceive himself into thinking that the way to be important is to be against everything, to rebel, to get people to pay attention to him. He may also play the role of a martyr in blaming others, especially those in authority, and criticizing the rules as being unfair to him, as he manipulates, often subtly, for sympathy.

The Youngest child in a family is often charming, warm, and friendly. He tends to be easygoing, for he is not afraid of making mistakes, having observed his older brothers and sisters making many mistakes. He is usually tolerant of himself and others. Investigators enjoy being with him because the feel secure with him.

A liability of the youngest child is that he may deceive himself into believing he can be important by manipulating others to do things for him that he should do for himself. He accomplishes this through his efforts to appear helpless, irresponsible, and undependable. He may, for example, manipulate his companions to get him up in the morning, make his bed, and cook his meals. The youngest child in a family is often pampered and spoiled, and he may attempt to get his own way by throwing temper tantrums, yelling, screaming, crying, and whining.

While he may appear helpless, there are often times when the youngest child is actually very powerful, such as when his resentment at being treated as the smallest and youngest causes him to fight against others to diminish his feelings of inferiority. When he takes this behaviour into his mission, he may do such things as belittle the accomplishments of other missionaries, parade his own accomplishments, and create artificial crises for which he presents his own ready-made solutions. He may be especially destructive when he uses his charm to keep others from confronting him with his irresponsible actions. He may also be adept at making others feel guilty and wrong, again avoiding confrontations, and getting his own way.

House of spiritual exercises Beyond the superficial